Pastor Darryl A. Momon was born in Atlanta, Georgia on December 9, 1961. He was baptized, received the gift of the Holy Ghost and was called to the ministry as a teenager. Pastor Momon, received his formal education from The International Bible Institute and Seminary in Orlando, Florida and was ordained in 1989.

Pastor Momon is a frequent speaker at conferences, conventions, and revivals.  Prior to being called to Pastor Old Mountain Top Baptist Church in 2005, he traveled the country ministering to Christians starting at the age of twenty one (21) by conducting more than forty (40) revivals each year. Having serving Christ for more than thirty (30) years, he has become recognized as a leader in the Christian Community for combining relevant pastoral teachings with an in depth knowledge of the bible. His ministry, targeted at the needs of today's audiences, is practical and people centered. He motivates Christians by helping them understand their purpose and the need to live a Christ centered life.  Pastor Momon also mentors other pastors, ministers and evangelists throughout the United States.  He teaches them to lead their flock based upon the biblical principles of faith love, healing, prosperity, redemption and righteousness.  His motto is:  “The ultimate goal is souls”.

As Pastor of Old Mountain Top Baptist Church in rural Douglas County for more than nine (9) years, he serves a small flock of dedicated parishioners who are generational worshippers from the surrounding area.  Pastor Momon has sponsored voter education drives, clothing drives, and championed grassroots “feet on the street” involvement from his members on political and social issues.  He was one of the first ministers in Douglas County to speak out against the actions of District Attorney David McDade and his prosecution of Genarlow Wilson.  Pastor Momon is a strong advocate of community involvement by his congregation and the belief that change comes through speaking up, speaking out and working on behalf of the disenfranchised.

Pastor Momon has served as an advisor to the head of the Church of God in Christ (COGIC) and as the Host and Moderator of a Christian broadcast on an interfaith television network five (5) days a week on three (3) network stations in the 1990s.  His weekly messages as Pastor of Old Mountain Top Baptist Church have been streamed live on the web and have reached thousands of households throughout the metro area.  Pastor Momon uses intimate personal testimonies to motivate others to seek Christ as their personal savior. As an extension of his lifelong ministry, Pastor Momon founded Community Alliance Group (CAG) in 2001 and is the Chief Executive Officer (CEO).   CAG is a 501 (c)(3) organization that works to organize and empower community residents through job training, summer enrichment programs for children, and strategic partnerships with other community-based organizations. 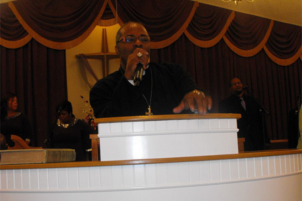